We arrived late at night in the City of Yogyakarta (Jogja) and were whisked away to our hotel in the city. we had splashed out a bit this time and booked a room in a small and very tranquil hotel to be our base in the city and we were not disappointed, it was a perfect escape from the madness of the city that we encountered on our first day. We took a becak (which is like a backwards tricycle taxi where you sit on the front a guy pedals at the back) into the vibrant market of Marlboro Street, we admired (and purchased) some Batik artwork which the city is famed for and shopped through the crazy streets that were packed with stalls as far as the eye could see, we tried to find the citys bird market and failed but instead we happily stumbled into a city square where the locals where getting ready for an evening of partying. people selling street food, families having picnics and the teenage boy racers riding round and round the square on there pimped up mopeds. They had these crazy lit up bike-cars that you could hire. some look liked buses and others like VW Beetles but they were all pedal powered. it was mad to see and as the evening drew in we found ourselves enjoying food at a indo/mexican bar and playing pool.

The next day was a very very early start at 3am as we took a trip out of the city to watch the sun rise over the Buddhist temple of Borobudur. We hiked up a small hill and were presented with the most unbelievable view as the sun rose behind the volcano of mount merapi, with the temple of Borobudur shrouded in mist as the sun slowly burnt away the morning haze and revealed the valley and the temple, it was an unbelievable sight. After this we headed to the temple itself, a massive 9th-century temple that had been lost in the jungle for 400 years and rebuilt by the dutch. decorated with 504 Buddha statues, 72 of them at the top encased in a bell shaped surroundings called a stupa’s. 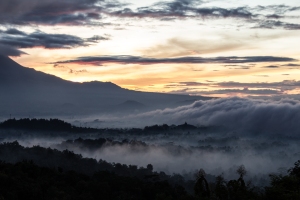 Mount Merapi and Borobudur at sunrise

The following day we explored the city’s Kraton, which is the seat of the sultan and the royal court, we listened to the early gamelan music of the region before headed out to the impressive Prambanan temple complex to the south of the city. These towering Hindu temples were breath taking and where originally surrounded by 224 smaller temples which are still in ruin. the complex contains hundreds more temples which we spent the afternoon exploring before watching the sun set behind Prambanan leaving the amazing silhouette you can see in the photos.

That night Lou managed to arrange for us to visit a collapsed cave out in the countryside. we were picked up and driven a few hours out into the hills, along crazy roads with crazy drivers and down a long bumpy dirt track to the Jomblang Cave. This is a cave that hundreds of years ago had collapsed 60 meters into the ground leaving it off limits to the locals and allowing a mini jungle to grow inside. We joined up with a handful of other mad tourists, got harnessed up and then we were lowered by rope 60 meters down the cliff walls to the jungle below.

Me inside Jomblang Cave

Once on the ground we ventured into the huge pitch black cavern below and eventually into another massive cave that towered 50 meters above us where a small hole had appeared in the top allowing shafts of light to mystically shine through as if from heaven. the cave roared with the sound of the underground river and we were allowed to climb onto a giant stalagmite that was 5 meters tall with a base that cascaded down the the cave to the river. this was quite a wet experience with the water almost pouring for the hidden stalactite above and us having to take our boots off so not to damage the stalagmite. After this we were hauled up out of the cave by 10 locals who would run into the jungle with the rope pull 2 people up at a time up the sheer cliff.

Our final day in java was spent exploring the locals food markets with every type of food you could imagine on sale.. after we had purchased some spices we ventured on Becak to the silver district before we had to leave Jogja and travel back to Singapore for our last stop of the trip. 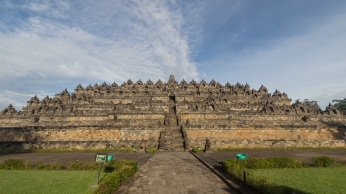 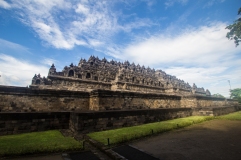 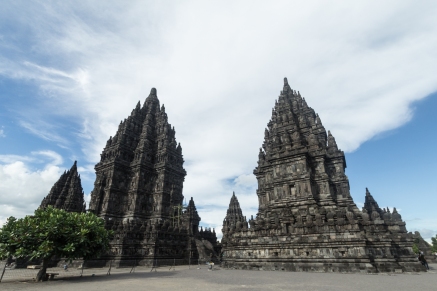 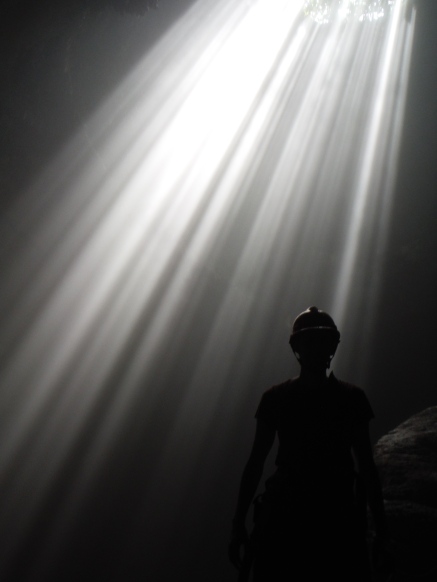 Me inside Jombang Cave 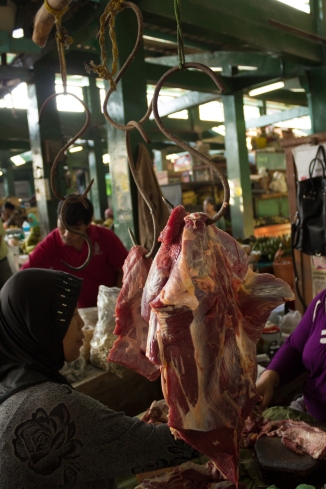